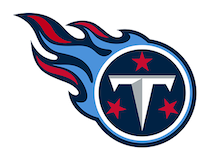 The Tennessee Titans were one of the permanent AFL teams and won the league in the first two seasons. In 1970, they became an NFL team with the merger of the NFL and the AFL. Their original name was the Houston Oilers but when the team relocated to Nashville in 1999 they became the Tennessee Titans.